When Darla Simone’s gambling-addicted brother Pax calls pleading for money, she knows why he needs it. Determined to end his sibling-emboldened extortion, she travels to Las Vegas intent on hauling him home. But before they can leave, Darla must deal with the wealthy casino owner that Pax has…upset.

Anton du Bruyn’s uneasy friendship with Pax is over. He’s determined to collect, until one look at Darla has him proposing payment options that don’t involve money. When an astonished Darla accepts his terms she’s left wondering if once is enough, or if she’ll face consequences in her life a world away?

This novella is part one of three in an ongoing serial. Each installment is available separately, or as a boxed set. 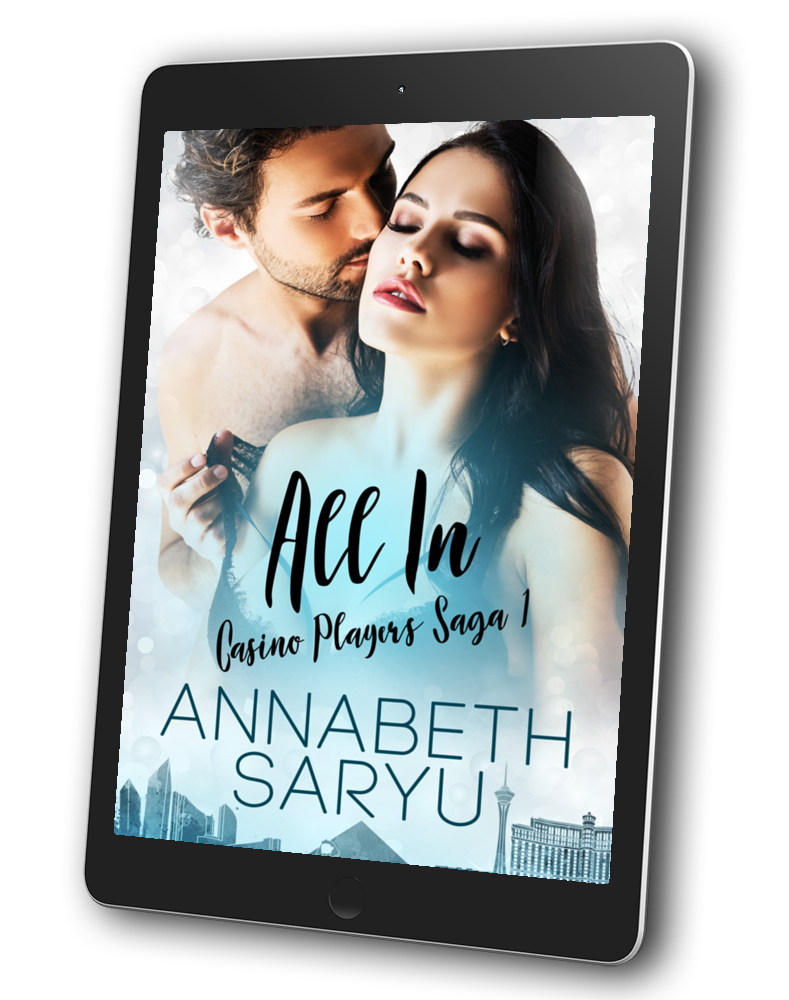 Please tell me this is a fucking coincidence. That the most attractive woman I’ve met in ages is not mixed up in this mess. That she left the bar to look for me and ran into the silver-tongued shark otherwise known as Paxton Lamar.

“Do you two know each other?” I use my best poker face.

“Yes,” Darla answers. She’s trying to avoid saying much. Given these shit circumstances, I don’t blame her.

My breathing halts in an attempt to suppress the disappointment that seethes through me. Pax must be the person she told me about. The one who causes those painful headaches. Literally and figuratively.  Not that I consider her weak because of them. If Paxton Lamar were my brother, I’m sure I’d have had a stroke by now.

The problem now is how do I deal with Pax while protecting Darla from this mess?

“Pax didn’t do so well at the roulette table last night. We need to speak with him. So, if you’ll excuse us for a few minutes?” I say.

“No. You can discuss his gambling losses with me here. I’m not leaving,” Darla insists.

“Darla, please,” Pax grumbles from beside her.

“Suit yourself,” I warn her. “Pax charged last night’s losses to his hotel room. Technically, it’s theft of services if he leaves without paying.”

“That’s bullshit!” Pax explodes. “The bet is less than a day old, and it’s a Sunday. Besides, I’ve always paid.”

“Not without me cutting you slack.” Anger rings in my voice. “You have a lot of nerve. Not only do you blow a hundred grand unsecured credit line in a single night, you charge it to your room? And now I’m supposed to cover that while you figure something out? Not this time.”

“Excuse me?” Darla interrupts us. “What did you say? How much?”

“Uh, Darla, hang on a minute…” Pax rubs her arm in a soothing gesture.

“One hundred large.” My clipped voice cuts through the banter and bullshit like a knife.

Darla gasps then covers her mouth as the color drains from her face. Shocked brown eyes meet mine for confirmation. I don’t flinch.

“One. Hundred. Thousand…dollars?” The stinging sound of Darla’s single slap across his upper arms stills in the air. I doubt it hurt him much. The skinny arms atop her delicious pear-shaped figure don’t look very strong. Still, it’s a hard struggle to hide my satisfaction.

“But why…wait. You only asked me to send ten-thousand. Where were you getting the rest of it?” she asks him.

“If history repeats itself, he’ll offer that as a down payment, then take another month or two to pay me the rest. In the meantime, the hotel—my hotel—ends up floating him a loan. Not this time,” I insist.

Darla looks over at Pax, whose only response is to hang his head in shame. Then she rubs the sides of her temples for what must be the tenth time since I’ve met her.

It’s clear from her response and the look on her face that she doesn’t want Pax to know we’ve met. Me either.

“I will pay Pax’s…hotel bill.” Her chocolate brown eyes meet mine. “But only on the condition that Pax leave the city immediately.”

“Yeah, I don’t like that idea very much either,” I reply.

“Well, Mr. du Bruyn, here’s the thing. Pax can’t pay you without my help. And Las Vegas is a dark and dangerous place for him. Clearly, he can’t control himself. And I can’t sort this out with you while I’m worried that he’s doing the same thing to the guy across the street.”

“Good. That means he’s got a horse in this race, too. Let Pax leave, Mr. du Bruyn. You don’t need the police. Or a lawsuit. I’ll stay here until you get your money.”

“And how long is that? While I’m sure I’d enjoy your company far more than his, Miss…?”

“Ms. Simone, with all due respect, I don’t know you from Eve. Which means I have no way of knowing if you can pay me any more than he can.”

Darla sighs then reaches around the back of her neck and fumbles with the clasp of her pendant. I watch with an involuntary rush of excitement as it bounces off the side of her luscious breasts when she pulls it up and out of the keyhole neckline of her dress. Then she takes something out of her enormous purse and approaches me.

“Here.” She hands me a tiny paper card. “The valet has an Audi A7 fastback with Texas plates. You can get the keys from him.” She looks at the pendant a moment longer, then offers it to me. “This and the car are easily worth more than you’re owed.”

“Ms. Simone, I don’t know what TV shows you like to watch, but this isn’t an episode of The Sopranos. We’re much more sophisticated. We don’t take cars. Or chickens. Or jewelry. If you need to sell those things to pay your debts, then do so and bring me the cash. I’m not a pawn shop.” I raise my hands to reject her items.

“This isn’t a payment, Mr. du Bruyn. It’s a promise. Today’s Saturday and the banks are closed. The earliest I can request a wire transfer is Monday. The soonest you’ll receive it is Tuesday.”

“Take them with the understanding that they will be returned once you’re paid in full,” she insists. “It’s going to be a long few days, and I don’t want him”—she flips a thumb over her shoulder at Denny—“following me into the bathroom to make sure I’m not trying to jump out a window.” She holds out her arm again.

I reach out and grab her extended hand, dragging the pads of my fingers along her palm before holding her soft fingers in my grasp.

“I’m going to have my jeweler take a look at this before I agree. For now, I have a few conditions of my own.”

“You”—I point to him with my free hand—“will voluntarily stay in your room, until Da—Ms. Simone and I sort this out. Of course, you’ll be blacklisted in the casino.”

“Fuck you, too,” I can’t help cursing back at him.

“Because it’s clear she’s the adult in the room that’s going to clean up this mess. Having you around is a waste of time, Pax. Aside from that, you’ve annoyed the hell out of me.”

“Of course, my invitation assumes that this piece of jewelry is what you say and not a carnival prize. If you’re lying, we’re going to do this the hard way.”

“Your jeweler might need a hint. Tell them ‘good mother’.”

“My jeweler will not. And I prefer that you remain in the hotel as well, Ms. Simone.”

“Fine,” she agrees. “But I want my own room. I can’t promise to not murder Pax if given the opportunity.”

“Of course.” I suppress a smile.

“And I’d like to be away from all the noise and so-called casino glamour.”

“Denny?” I call out to my operations chief.

“Get everyone sorted out.”

“Right away, sir.” Denny turns to leave and looks back at Pax and Darla.

To Pax’s credit, and my surprise, he does what she asks. Without another word, he follows Denny out of the alcove.

Darla and I are still holding hands when she turns back around and takes a deep breath.

“I take it you don’t have a problem with hiding the fact that we’ve already met?” she says.

“Are you kidding?” I let go of her hand. “And let Pax know that the two people he’s relying on to fix his problems are sympathetic to each other? No, no, and hell no.”

“I agree. As sad as I am to say it, Pax is much too cagey not to try and use it to his advantage. He won’t find out from me,” she promises.

I watch her for a moment as my outlook swings back and forth between helpless and hopeless. Then I reach out and stroke her shoulder-length curly hair. It’s pretty bold, I know. But I don’t think I’ll get the chance again once she hears what I’m about to say.

“Darla, take my advice,” I stare into her deep, dark brown eyes. “Go home. Pax has been sinking in this particular quicksand for quite a while. Don’t go diving in after him. Stay out of this. Please.”

“How can you say that to me?” She sounds angry. “He’s not a puppy I can’t housebreak. Or a business partner that doesn’t deliver. He’s my brother.”

I nod, then look down at the floor before taking her hands in mind. I bring them to my lips and place a gentle kiss on each of them.

“Your… brother has taken advantage of my friendship, and it’s cost me money.” I look into her eyes. “I told you once that I’m not a gangster. But I am brutally ruthless. Your brother needs to make amends, and I’m going to see that he does. Don’t go getting in between us, Darla. I’m begging you.”

“I can’t not help him.” She pulls her hands out of my grasp. “Don’t try to get out in front of that.”

“Suit yourself.” I give her a curt nod and place her items in my jacket pocket. Then I turn and leave out the back of the alcove.

I’m halfway down the corridor before I remember to breathe again.